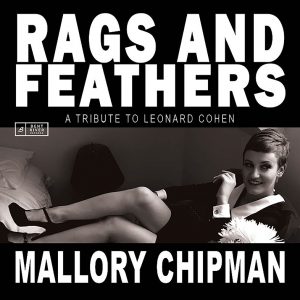 Rags and Feathers:
A Tribue to Leonard Cohen

Mallory Chipman remembers hearing Leonard Cohen’s music as a child. “I was drawn to the high female backup vocals that were so gorgeous and ethereal,” says the Edmonton jazz singer, composer and arranger. “As I got older, I started digging into the lyrics and found that there are few artists that are so poetic, and I was really in love with that side of him. Just amazing metaphor and figurative language that he would use to create such a vivid image with his music.” It was inevitable that she combine her kind of jazz with Cohen’s genius. The result is the album Rags and Feathers: A Tribute To Leonard Cohen…

“I really do believe it has the power to connect with a lot of people, so I’m really excited about taking it on the road,” says Chipman… Undertaking Cohen, Chipman was careful to balance the songs that would sound best by her musicians with her desire to represent a cross-section of his music. “The music did change and the lyrics did change but the quality didn’t. He may have had different influences that appear during different parts of his career but it’s all so beautiful and all so sensitive and thoughtful.” Songs on the album include “Ain’t No Cure For Love”, “On the Level” from Cohen’s last album You Want It Darker, “Suzanne” and, of course, “Halleluja”.

This album is dedicated to Mallory’s grandfather, Tommy Banks