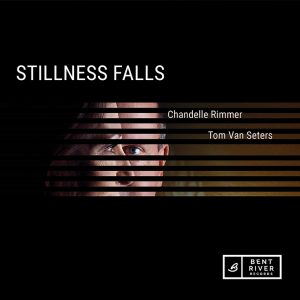 Stillness Falls is the first collaborative project for Canadian jazz musicians Chandelle Rimmer and Tom Van Seters. Separately, they are both well versed in the Canadian jazz scene, having shared the stage with numerous distinguished musicians over the past 25 years. Both Tom and Chandelle are Faculty Members in the Department of Music at MacEwan University in Edmonton, Alberta, where the two-year project that is Stillness Falls began. When they first started working together, they decided that they wanted to collaborate not only as performers, but also as composers. At the time, they knew that they liked to play music together but they didn’t know if they could write music together. They were delighted to discover that in many ways it was easier than writing music in isolation. Sharing in the responsibilities for a composition’s creation and development freed them up in a way that often led to wonderfully unpredictable outcomes. In the process, they discovered that their aesthetic ideals were uncannily aligned.