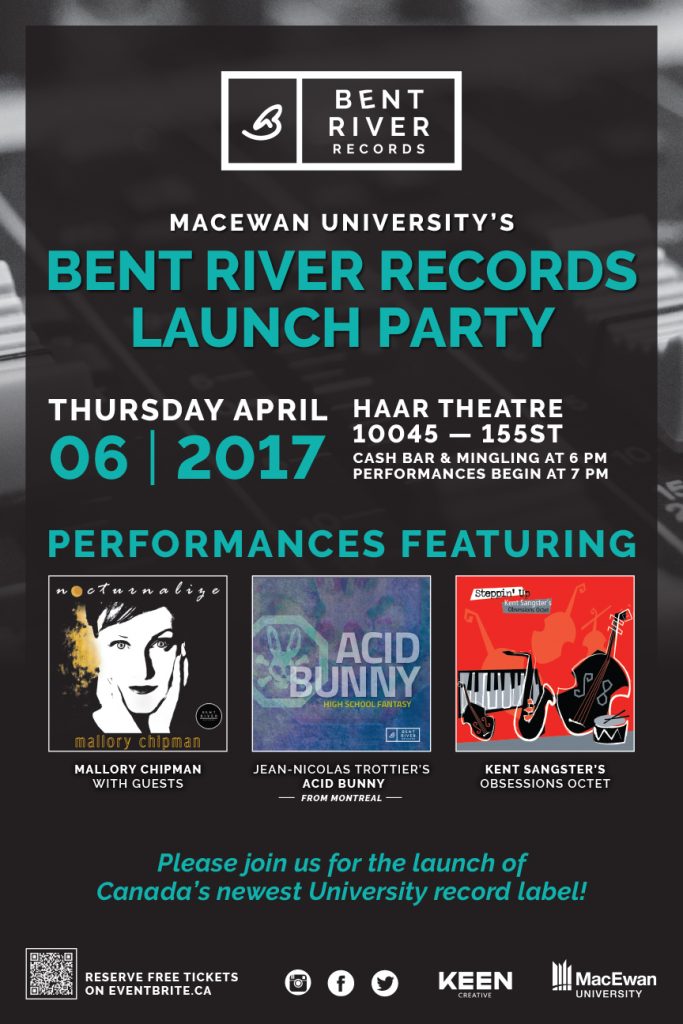 After months of planning and preparation, we are thrilled to announce the official launch of Bent River Records was a huge success! While we already had three artists on our roster who have released albums with us, we had yet to formally celebrate our conception. On April 6, 2017, we proudly presented Kent Sangster’s Obsessions Octet (Edmonton), Mallory Chipman (Edmonton), and Acid Bunny (Montreal) in a showcase of their innovative and original music on the John L. Haar stage. This concert also acted as a farewell to MacEwan University’s beloved Centre for the Arts and Communications campus as we prepared to move downtown to our new home. Our launch party was a great way to introduce you to our artists!

Kent Sangster’s Obsessions Octet is an award-winning ensemble that incorporates elements of jazz, classical, and tango music styles. They have toured extensively through Canada and Europe and their latest release, Steppin’ Up, was released on Bent River Records on November 1, 2016.

Mallory Chipman fuses the improvisational nature of jazz with the honest lyricism of folk and grittiness of rock and roll. She has performed internationally; showcasing her original music to sold out crowds. Her latest release, Nocturnalize, was released on Bent River Records on November 20, 2016.

Acid Bunny is a trio comprised of prodigious musicians, Jean-Nicolas Trottier (trombone, band leader), Rémi-Jean LeBlanc (bass), and Richard Irwin (drums). Their music is a combination of rock, jazz, and electronic influences. This launch was also the official release of their upcoming album, High School Fantasy.