Well everyone, the time has come again… You’re cordially invited to our 2018 Bent River Artist Spotlight! It will be an evening full of wonderful music brought to you by three of the artists on the Bent River Records Label. Montreal-based Joshua Rager will be performing music from his latest release, Jondo; Mallory Chipman will once again grace the stage by performing tunes from Rags and Feathers: A Tribute to Leonard Cohen; and Tom Van Seters and Chandelle Rimmer will captivate the audience with music from their first release together (and the latest Bent River Records release) Stillness Falls.

The event will take place in the Triffo Theatre on Tuesday, April 17th. There will be a reception and cash bar at 6:00pm, and the live performances will begin at 7:00pm. Make sure that you go online to the MacEwan Box Office and reserve your free ticket. We also will have a booth set up where you can purchase BRR merchandise, and the albums on the BRR Label.

Reserve your free tickets for the Spotlight on April 17th here: 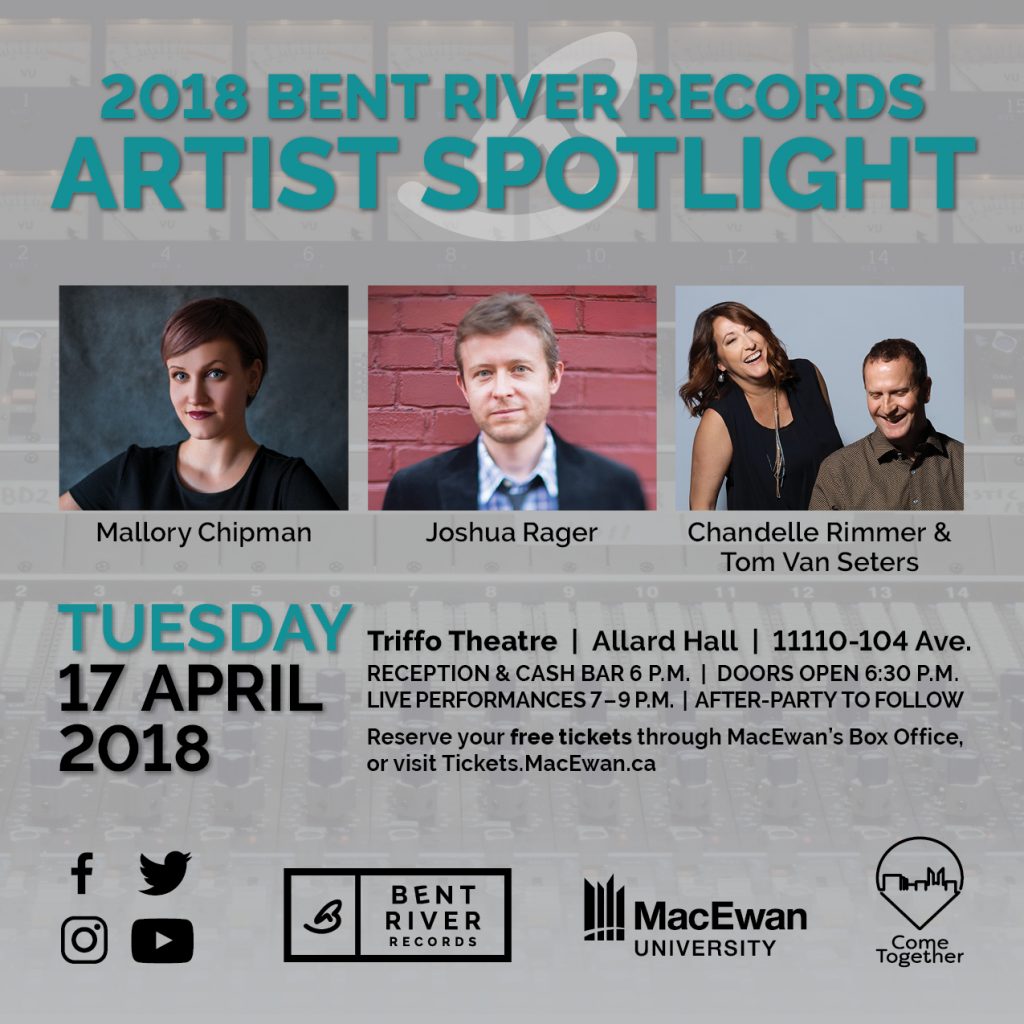 On March 26th, head on down to building 6 and catch a “Sneak-Peek” of our upcoming Artist Spotlight! This special pop-up event will be in the MacEwan bookstore, (aka the Mstore) from 12-1pm! The Bent River Records team will be there selling merchandise and promoting our 2018 Artist Spotlight. There will be a lunch hour performance by Mallory Chipman, to give you a little taste of the magic that will happen at Spotlight in April. Speaking of the MStore, did you know that they sell Bent River Records merchandise all year round? That’s right! If you can’t make it to our sneak preview event but still want to purchase a CD (or two), they are available for purchase online or in-store.

The 2018 Bent River Records Artist Spotlight will take place on April 17th in the Triffo Theatre featuring performances by Chandelle Rimmer and Tom Van Seters, Josh Rager, and Mallory Chipman. Previously known as the “Bent River Records Launch”, this event takes place annually to showcase the different projects that were completed each year on the Bent River Records Label.

Here’s the link to purchase or browse online: 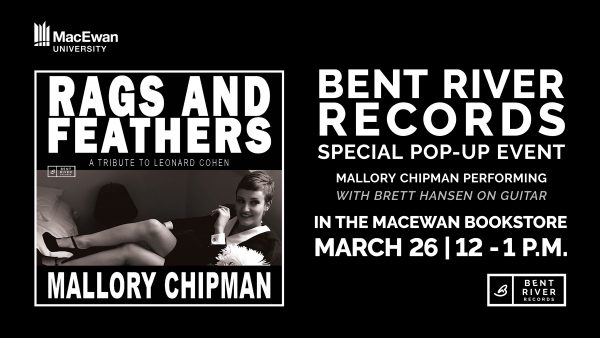 To celebrate this week’s #tbt, we’re time travelling back to April 6, 2017, when Bent River Records officially launched to the public with our inaugural artist spotlight! We proudly showcased three of Bent River Records’ incredible artists: Obsessions Octet, Mallory Chipman, and Acid Bunny, all of whom released albums on BRR in the 2016/17 season. The evening was full of laughter, conversation, community building, and, of course, MUSIC! As you can see from these photos, we had a marvellous time celebrating our artists, and we can’t wait to do it all over again on April 17, 2018 in Allard Hall’s Triffo Theatre. Stay tuned, as we will be revealing which artists will be featured at this year’s spotlight very soon! 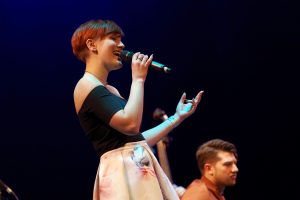 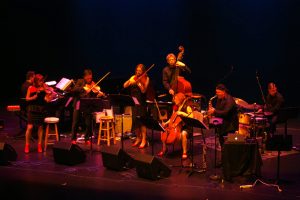 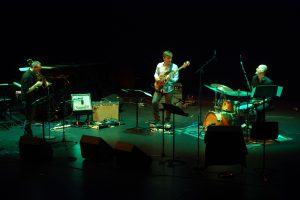 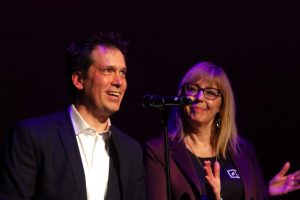 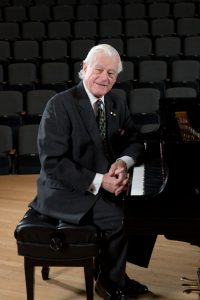 On January 25th, the arts community lost Tommy Banks – a remarkable man and renowned musician. The team here at Bent River Records is so fortunate to have worked with such a talented and beloved person. A pillar in Edmonton’s music and arts community, The Honourable Tommy Banks supported the work we have been doing at Bent River by attending our label launch concert in 2017, and he even contributed to a few of the albums we have on the label. He was featured on Mallory Chipman’s debut album Nocturnalize, and executively produced her second album, Rags and Feathers: A Tribute to Leonard Cohen. The BRR team sends their love and thoughts out to his family during this difficult time. There will be a memorial for him at the Winspear Centre on Wednesday, February 14 at 7:00pm to celebrate his life and legacy. Doors open at 5:30pm and it is general admission. 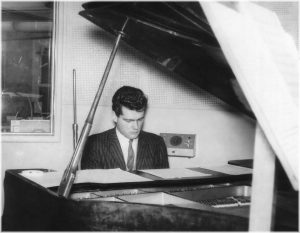 For those of you who did not know Tommy, the following article provides a bit of insight into the impact Tommy Banks had on our community:

Book off January 31 st on your calendar, Maria Schneider and the Edmonton Jazz Orchestra are coming to MacEwan’s Triffo Theatre!

Maria is a big band composer, bandleader, 12-time Grammy nominated, and 5-time Grammy Award winner. She is not only known for unique funding of projects through the company ArtistShare, but she is also notorious for blurring the lines between genres and working with collectives such as The Saint Paul Chamber Orchestra, collaborating with David Bowie and headlining Jazz at Lincoln Centre. She will be around the university conducting arranging, composition, and music business clinics for students and faculty, as well as a rehearsal with MacEwan’s own big band and an open rehearsal for her Edmonton debut. Take in the magical experience of Maria leading the Edmonton Jazz Orchestra through her Big Band compositions on January 31 st . The doors open at 6:30 and the show will begin at 7:30. Tickets begin at $25 for students, and $35 for general admission.

If you would like to purchase tickets for the show, you can get them here:

To learn more about Maria Schneider, check out her website:

MacEwan University welcomes award-winning producer and guitarist Russell Broom to the campus this week. Best known for his work with Jann Arden, he has an extensive career in not only producing and performing; but also mixing, engineering, songwriting, and music in film and TV.

If you want to learn from a real pro in the industry, this would be the week to get involved! Russell Broom has an impressive roster of musicians he has worked with including people like George Canyon, Lindsay Ell, Chantal Kreviazuk, Corb Lund, Josh Groban and the list goes on! How lucky are we to have him right here in our classrooms?! He has won awards such as JUNO songwriter of the year, WCMA producer, musician, engineer, and pop album of the year (and yes – those are all separate awards!) and for the record, there are many other awards he has received. Russell has also spent time working on music in film and television, including shows like CMT, Alberta Primetime, MuchMoreMusic, Inside Hollywood etc. During his three days at MacEwan, he will be doing workshops with the student combos and showcase bands, a recording production masterclass, a guitar masterclass, a songwriting workshop, a workshop on music career management, AND a concert! It will be a busy couple of days here for him, but the BRR team is excited to show him around our new home. If you are interested in learning more about working in the music industry, you should definitely be at one of these workshops!

For full details on Russell Broom’s visit to MacEwan:

Lionel Rault has been a host on CKUA for over two decades. He’s hosted Lionel’s Vinyls, R&B Revue, Nine to noon and The Afternoon Edition. His heart lays in the folk-roots genres and has been active as a singer-songwriter in the genre since 1969. So as you could imagine he’s very well respected in the Edmonton music scene, he is the only active performer to ever be inducted into the Edmonton Blues Hall of Fame.

Lionel has been independently releasing albums since 1980. He has released four albums Killin’ Time in 1980, Been So Long in 1989, No Tell Hotel in 1992, Lionel Rault in 2004 and The Further Adventures of…  in 2007. So I guess you could say Lionel knows a thing or two about a thing or two. Lionel is more than happy to call Alberta home, which is good for us because I feel the progression of music exposure in Edmonton would be vastly different without his influence. He has raised two children who have also followed his footsteps and become musicians in their own right. These days Lionel plays in the Folk-roots-blues band, The Rault Brothers

I couldn’t imagine the creativity it would take to come up with 20 years’ worth of unique content for radio, but if you’re looking for pointers Lionel’s door is definitely the one you should be knocking on. We are thrilled to have Lionel on the panel and as an honorary member of Bent River.

Maud Salvi is the Executive Director of Sled Island. Sled Island host upwards of 250 bands across 30 venues, so as you can imagine it is quite a large under taking. She has been working with Sled Island for the last 5 years and if you ask me has been doing a pretty amazing job. Maud is originally from France but landed in Montreal in 2008 working as the artistic producer for Pop Montreal International Music Festival. Pop Montreal schedules more than 400 bands across 50 venues.

If you think about it, Maud has probably listened to more bands that you will ever listen to in your whole life. I personally cannot think of a better person to judge the submissions to our competition. Maud is one of the most resilient arts managers you will ever meet. Her first year as Executive Director of Sled was 2013, the year of the floods in Calgary. She was not only able to manager a worst-case scenario situation but also have the festival continue to run in 2014 without change and it has been going strong ever since.

Maud has a great ear, I can’t wait to hear her insights on all the submissions. Her experience in producing alternative festivals will be just the insight we will need to find the next Arcade fire. Maud is as hard working as they come but is also laid back and knows how to have fun, the perfect fit for BRR really. We are very excited to have Maud on our panel and as an honorary member of Bent River.

Nuela Charles’ mix of pop, jazz, R&B, hip-hop, and soul is in a league of its own. Based in our dear city of Edmonton, Nuela has a way of bringing warmth to a chilly November afternoon. Nuela has been nominated three times for the Western Canadian Music Award for Urban Recording of the Year, in 2011, 2013 and 2017. And in 2017 took home the Western Canadian Music Award for Urban Artist of the Year.

Nuela released her first album Awake in 2012 and her follow up The Grand Hustle in 2016. Nuela’s catchy rhythms and soulful voice have gained her popularity in Edmonton, the U.S., and Europe. Nuela’s music has been featured in many TV shows and films in Canada and the U.S.

Nuela is a true Edmontonian. She has seen great success here and feels no need to leave. We respect and support that here at BRR and want to see more artist staying in Edmonton. Even though she travels in support of her music she always finds her way back. We are very glad to have Nuela joining us on the Panel and to have her as an honorary member of Bent River.

Chloe Albert is a Juno nominated singer-songwriter from Edmonton. Her first album Dedicated State was released in 2008 and won her the Canadian Folk Music Award for ‘Emerging Artist of the Year’, and she hasn’t slowed down since. Her sound is thoughtful, versatile and lends itself well to not only folk but blues, roots, soul, jazz and country, her storytelling ability is revered by many.

Chloe is releasing her third album in 2018 and we can’t wait to hear it if its anything like her last two it will be spectacular. I remember seeing Chloe play the Folk Fest in 2009, it was the first time I had ever heard her, she blew me away. I took Dedicated State home with me and listened to it many times. We are so happy to have Chloe on the panel and as an honorary member of Bent River.